Wines from another dimension! 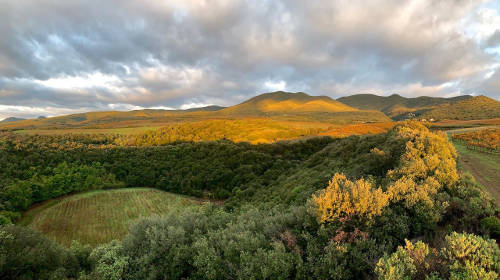 All images provided by MPR Communications, unless otherwise indicated

Domaine du Météore is unusual in many ways. Owned by two English doctors since December 2018, it's situated in the village of Cabrerolles in the foothills of the Haut-Languedoc mountains at over 300m altitude. Vineyards span both St Chinian and Faugères appellations, benefiting from the different types of rocky, schistose terroir in each region. However, the defining feature of the domaine is a 200-metre-wide, 50-metre-deep meteorite crater at its heart, with vines planted inside. At only 10,000 years old, it is one of the youngest known craters on the planet and one of the 50 largest in the world.

The lure of the Languedoc

Wine enthusiasts, neurologist Paul Jarman and endocrinologist Paul Jenkins met each other over twenty years ago. Paul Jenkins' family had a holiday home in Faugères, so he knew the area well and also had an ambition to own a winery there. Spending two years visiting vineyards in Faugères, St Chinian and other regions, he persuaded Paul Jarman to join him. They shortlisted four vineyards, of which Domaine du Météore stood out.

The domaine had been with the same family for 30 years, was certified organic for over 10 years and already enjoyed a good reputation. The previous owners needed to sell the property, but not to anyone, as Paul Jenkins explains. "They were getting older and their children didn't want to continue. They wanted to sell to the right people who shared their love of natural and organic [agriculture], not to a big multinational. They liked our vision - what we wanted to do."

The meteor crater is more than just a talking point. The two men firmly believe that it affects the wines in a positive way and all cuvées include some wine made from grapes grown inside the crater at its base or from plots near its edge. "Whatever minerals and elements were in that meteor would have been sprayed around into the soil", they affirm, "and atoms from that meteor will be incorporated into the vines themselves." 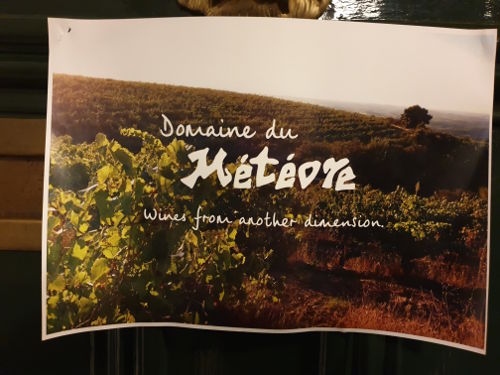 "We think they're particularly good grapes and full of flavour", says Paul Jenkins. "That's why we want to put a little bit of them in all our wines. Even our top cuvées, using grapes from plots further away, contain a small amount of 'cosmic' Syrah from within the crater base and are therefore subject to meteorite soil. We did a standard chemical analysis of the soil, but these very rare minerals and elements (unlike nitrogen and phosphorus etc.) aren't normally checked for in a standard analysis. There's a very high iron content and the magnetic field within the crater is different to what's around. We like to think it adds a little cosmic dust - that's why we call it wines from another dimension!"

"All our wines are named after meteorite showers", explains Paul Jenkins. "Perséides is particularly good, because you see that best on August 14th when we open a restaurant at the foot of the crater. All the food is produced locally or grown on our estate. It's all organic and cooked over the previous year's prunings. So, you eat next to the vines on the previous year's wood with food from all around you. It's a six-course fixed tasting menu with each course accompanied by one of our wines. You're sitting there next to the vines, under the stars and on August 14th, you'll be drinking Perséides, which is one of our cuvées, and watching the Perséides meteorite. It's a wonderful and special evening!" 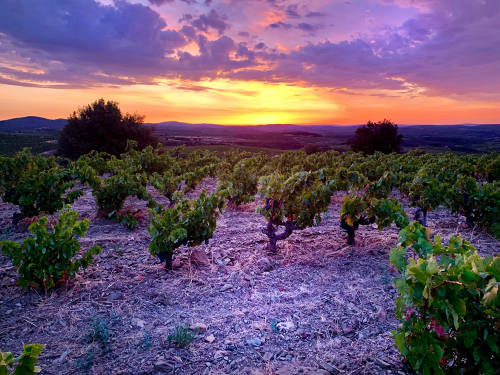 The most common pruning method used is bilateral Cordon de Royat, which includes the Syrah planted in 1984 and 1992 at the base of the crater. Further Syrah vines, Vermentino and Mourvèdre sit around the perimeter on top of the crater, along with bush vines of three varietals - old Carignan dating back to 1963, Cinsault and Grenache Noir. There are additional plots of red and white grape varietals planted in the rest of the domaine, but away from the crater. These include old Carignan from 1964 and 1969, which together with the grapes from the 1963 vines, are used for their Carignides cuvée. 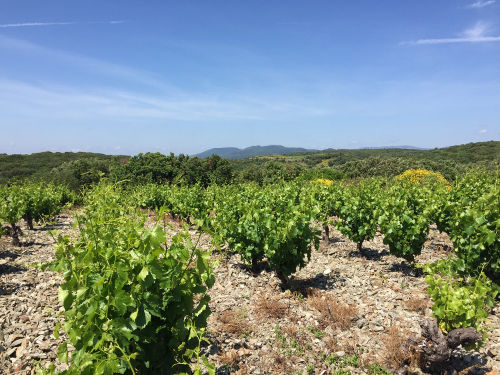 Schist is a type of hard, mineral-rich, metamorphic rock formed over time from crystallised clay and water deposits.

Schist soils stress the vines, forcing the roots to push deeper for their water and nutrients, something which the pair believes intensifies the flavour of the resultant wines. The blue schist of Faugères and the predominantly yellow schist of St Chinian impart subtly distinct stylistic differences to the wines. "The schist soils are famous for giving acidity, freshness and very good balance in the wine, even in hot vintages like 2015", notes Paul Jenkins. "We are almost unique in being able to compare the two schists directly, made by the same vigneron from the same domaine in the same cellar!" The large diurnal range during summer (10°C to 35+°C) and the windy conditions, important in organic viticulture for reducing mildew, also help to maintain acidity and freshness. 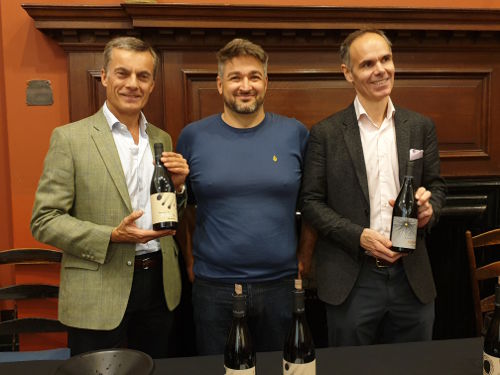 Winemaker Vincent Balansa details further the uniqueness of their terroir. "Our plot of Saint-Chinian Roquebrun for the Parangon cuvée is made of hard yellow schist and gneiss, formed with sand inside, below a shallow layer of iron-rich clay soil. This gives the ground an orange colour. With more clay than in Faugères, the soil holds water and organic matter better, but it's still a poor soil with varying degrees of acidity. The plot faces north-west to north-east."

"Our south-east facing plot of Faugères for the Lyrides cuvée is made of crumbly grey and blue shale underneath a layer of fragile, crumbly schist with little soil on top. Tectonic movements have resulted in vertical strata of schist, so it's easy for the vine roots to descend deep into the ground. The soil is poor, containing almost no clay. It's acidic, does not retain water or organic matter and drains easily."

Vincent Balansa: "The previous owners didn't do pigéage, but just remontage and délestage, in the Bordeaux way - in the Emile Peynaud spirit. I started pigéage in the Burgundy way, on the 2018 vintage … No rules, no recipes, just tasting, experience and feeling."

Harvesting, winemaking and ageing are identical for these two wines, the estate's top cuvées. The grapes ferment on marc for eight weeks with regular pigéage from the 2018 vintage, before ageing on lees in Burgundy demi-muids for two and a half years. The wines are unfined.

Minerality is one of today's hot topics in the wine world and Paul Jenkins offers his views on this somewhat controversial topic. "While there is no generally accepted definition of what minerality means, I regard it as the non-fruit and non-wood derived flavours of a wine reflecting the combination of terroir and soil type. It is particularly relevant to nutritionally poor stony soils in which vines are planted at low density with their roots delving very deep (up to 10m) to extract moisture and food. When combined with low intervention in the wine making process, this results in wines of leanness, precision and elegance. We regard our Méteore wines as having particular mineral characteristics, as they are derived from vines grown not only on renowned schist terroir but also uniquely from within the meteor crater and, therefore, subject to cosmic mineral influences."

The estate is currently in biodynamic conversion and Paul Jenkins has strong views on the subject. "If you look into the evidence, it is there. The vast amount is circumstantial, but more and more of the top estates across the world are following biodynamic principles."

So, what does he believe biodynamic principles bring specifically to the wines and are they too easy to dismiss as unscientific? "I think there are too many people practising it, including some top estates who don't want it publicised as it's bad for their image. They wouldn't be doing it with the increased costs, labour and complexity, if they weren't convinced that it added to the quality of their product. They aren't doing it because it's a fad, but because they really believe it enhances subtly, but distinctly, the quality of their wine. It makes sense, because around the world people who farm biodynamically according to the lunar cycle, do it for a reason."

"I was in Costa Rica a couple of years ago in the rainforest and I distinctly remember asking someone about the palm roofing in his house and when he did it. He said: 'We cut the palm on the full moon, because it'll last five years. If we do it on a low moon, then only one year.' He then said, 'Why are you asking this question as it's absolutely obvious?'! So, they have learnt. Therefore, I think there is enough evidence - and I am a scientist. Just because scientists don't understand precisely why it works, you must be humble enough to acknowledge that it could work. It's just our ignorance. You dismiss it at your peril if enough people have been doing it who are convinced. Also, I think in blind tastings, the evidence is there."

What about burying cow horns with manure for six months? "You're inoculating the ground. From a scientific point of view, all you've done is culture the bacteria. They divide every 20 minutes and within a few days you have astronomical quantities of bacteria which break down the soil naturally. So, you're creating your own ecosystem within the vineyard." 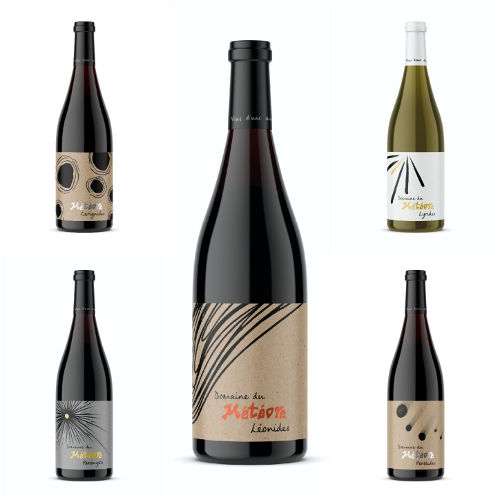 While some in the wine industry may be unconvinced by the concept of biodynamic agriculture, Paul Jenkins and others present a strong case for its effectiveness. On tasting, all the wines show freshness, balance and superb drinkability, while having individually distinct characters and some complexity too, the Lyrides Rouge and Blanc particularly strong in this respect. Is this mainly due to the viticultural methodology, the blending skills of the winemaker or the unique terroir? Surely, it's a combination of all three with a strong commitment to making the best wine possible from the grapes planted. As Paul Jenkins says, "The wines are all very good. What we're trying to do is just take them to another level by incremental gains in everything - in the vineyard and in the winery. For example, we're using barrels from the finest Burgundy oak. They're expensive but we think it does give a little edge to the wines."

Currently they're producing the first vintage they are fully responsible for. However, they have had a distinct input into the blending of wines made from previous vintages before they took over. Future plans include extending the range of wines and early this year, Paul Jenkins says, "we'll be launching our very special rosé from vines in and around the crater, called The Big Bang. We think it'll be very popular to challenge Provence. We want to move slightly away from the bling and publicity of the Provence style to the more natural wild beauty and authentic artisan nature of the Languedoc. In the Languedoc, the terroir is so fantastic, we should be able to make a great wine." Judging by their efforts so far (and that includes a sneak tasting of the rosé), the Domaine Météore rocket ship is certainly setting off in the right direction!

Domaine Météore wines are available in the UK from Les Caves de Pyrene, Haynes Hanson & Clark and Stone, Vine & Sun, or can be bought direct from the estate.

This is the full version of the article posted in IWC Canopy, 28th January 2020.